Based on the original novel by  Yoshikazu Takeuchi, Perfect Blue offers a glimpse into the evolving, modern psyche of the entertainer, mixed with a dash of the psychological and a heapful of the surreal.

MyAnimeList synopsis: Mima Kirigoe, a member of a pop-idol group called “CHAM!”, decides to quit singing to pursue a career as an actress. Some of her fans are displeased with this decision though, particularly a stalker named Me-Mania. As Mima progresses into her new career, those close to her are violently murdered one by one, and Mima begins to lose the ability to distinguish reality from fantasy.

The suspense and perhaps, psychological/existential horror that arises from the skillful portrayal of characters involved allowed the film to be well-received by critics and arguably, one of, if not the most well-acclaimed Satoshi Kon film to ever exist. This article will mark my second time watching the film, and my thoughts upon watching the film a year later from the first watch.

The film stars a plucky pop star, Mima Kirigoe, who is currently transitioning from being the lead singer of a small pop group to becoming a solo actress. The film opens up with perhaps a humanising view of the characters involved, from the audience to the crew itself, to perhaps make these people feel more real and the film, more realistic. We see them scrambling to fix Mima’s costume backstage as Mima remains nervous for her performance. Yet, off the stage, we see that she is no different from any one of us – she takes the subway home, crowded by strangers who don’t recognise her, part of her daily routine. She even goes to the supermarket to buy stuff. Just like….regular people. By depicting Mima’s daily life, Kon manages to give her realism and allow the audience to sympathise and later, get involved in the suspense. Intersplicing it with her performance on stage sets the film up to transit into the next stage of the plot: Mima’s own transition towards becoming an actress.

The ruckus created before she announces her retirement from the pop idol industry reveal the prime suspect for her stalker: this deformed man who helps break up the fight and scare the ruffians away. As Mima goes home, she receives a letter telling her to visit a website on the internet. She’s also called by a mystery person who just breathes heavily into the phone, so we have that stalker cliché here now.  Miley had a stalker once. And she’s also a singer-actress. Life imitating art?

Anyway, while the opening scene makes Mima human, it makes her audience – and the faceless stalker- human as well. For who is this stalker but another human, doomed to err just like the rest of us? Mima doesn’t have such time for forgiveness though, for when she loads up the website she realises that someone is keeping a diary about her daily life, one that is terrifyingly detailed and updated frequently. Her initial surprise thus turns to horror as she reads more and more of the website’s diary entries. It only serves to deepen the suspense and the sense of terror Mima gets.
Her first role is as the family member of a victim, and as she is interviewed by a psychiatrist in the hospital, the show cuts to the homocide scene of a runway model, yet another popularity-based industry. Coincidence? I think not. It’s revealed that this is the fifth victim of a killing spree: foreshadowing, perhaps? As the show progresses, we see more and more of her acting work, as she becomes increasingly devoted to her job, to the point where she immediately agrees to act in a rape scene despite her manager’s fervent disapproval. We also see her sanity starts to fray as she comes into the office believing she was still part of CHAM and then snapping out of it to find herself back in her starting career. We also get more scenes involving the mysterious deformed man who may or may not be her stalker.

But as she finishes filming her traumatic rape scene…one that took multiple takes…she comes home to find that she had once again, forgot to feed her fish and that they all died. This makes her snap as she comes to realise that, as her hallucinations of her pop-idol self on the train have told her, she didn’t want to become an actress at all – she just couldn’t bring herself to trouble the people who brought her into showbiz. At this point, she gets mocked by a reflection of her pop-idol self in the mirror, who asks her whether she ever wanted to be an actress at all. She throws her pillow at the mirror, and the film cuts to her fish tank, where the fish were still swimming. Breaking point now, Mima. Her stalker is shown in his room plastered with posters of her, and after a TV interview, the murders begin.

The murders take on their own level of horror because they’re not straightforward “I charge at you with a knife” murders. There’s sort of this feeling that the victims are being picked off one by one. Like when the screenwriter hears a CHAM pop song in the carpark, he finds a CD player in the lift, and has his eyes gouged out by an unknown murderer. She gets increasingly under the control of her delusions as she sees her pop-idol self everywhere, as she degrades herself more and more doing her line of work, while CHAM does better and better without her. Seeing her pop-idol self in a broadcasting building, she starts to chase it as it taunts her, running away. She starts to lose her grip on reality as she becomes unable to tell the difference between her dreams and her nightmare.

We see yet another murder scene as a staff member gets stabbed in the eye and multiple times by a pizza delivery man, who turns out to be….Mima? Oh wait, it’s yet another nightmare. Or is it? At this point our grip on reality is fading as well. And in as cliché a plot twist as possible, it turns out that the murder did indeed occur, but was Mima the culprit? Seems so, as she finds what appears to be bloodstains on a piece of clothing she recently bought. We see yet another hint to this as her character in the drama…is a murderer suffering from the delusion that she’s in a drama. D’oh.

Later on, the climax occurs when Mima, after the end of the drama she’s filiming, is attacked by the deformed man who claims to be the writer of the website, Me-mania, who accuses Mima to be pretending to be Mima and that he was Mima. Are you as confused as I am? Good to see that some things don’t change. However, this man claims that the real Mima emails him every day and tells him that Mima’s a nuisance, where it’s hinted that the same was said for the other victims as well. She breaks free and knocks him out, but when the manager and Mima return to find him, he’s gone without a trace. Calling her producer, the show cuts to a scene where both the stalker and the producer are dead. So was the stalker really the murderer? God knows at this point.

The true horror comes when she realises that she’s not in her room, but a reproduction of it: her fish are alive, yet her idol poster is on the wall, and the scenery outside the window is completely different when she opens the curtain to find that the railway’s suddenly so near her house. At this point, the delusion sets in. She comes in to show off her new costume, but her reflection in the mirror reveals that it’s….Rumi, her manager? At this point, it’s revealed that Rumi knows the stalker, Mi-Mania, presumably feeding information about Mima’s daily life under the guise of being the real Mima, and she attacks Mima. As she strangles Rumi , Rumi stabs her and Mima is finally able to see her for who she is. After a long chase scene through the city, taking off her wig makes Rumi return to being Rumi and she stabs herself on a convenient shard of glass. 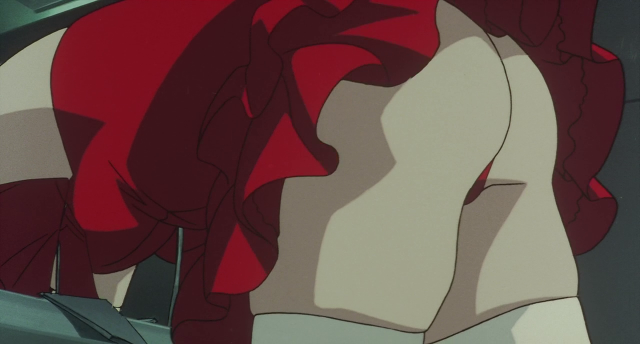 As a truck comes speeding down the road, Rumi stands up, under the delusion that she is Mima, and spreads her arms to welcome what she hears as fanfare and applause, and take in what she sees as camera flashes. However, she’s saved by Mima who pushes her to the side of the road.

She later visits her in the hospital, having become a successful actress and moving on from her delusions.

At the end of the day, what was the film even about? If Rumi often wore the costume and appeared before her, why couldn’t she see her as Rumi? Rather, how delusional was she? She did see her pop-idol self dress up as her and talk to her in her reflections though, so it’s only natural that the other way around, we see her true self. How was Rumi able to hide so many of her murders without getting caught, even leaving behind evidence in her house? How much did Rumi stalk and know Mima to the point where she could literally post her thoughts?

We know that she’s deluded into thinking she’s Mima, but no-one really says she knows that much about Mima. I think the show serves ultimately as a form of introspection, a way of delving into the nature of the human psyche. For what is identity, but yet another construct of humanity, a function arising from our sentience that seemingly serves no true purpose? Mima was conflicted and stressed about her transition to being an actress, as it was never what she aimed for, but something she felt so obliged to do, as per the Japanese psyche, that she willingly agreed to do anything, even the traumatic rape scene. The drama itself foreshadows the end, and perhaps Rumi, out of the despair that is Mima’s degradation upon dropping out of pop stardom, snapped like a mother figure unable to take the news, leading to the murder of every single person who appeared to be a threat to Mima, like protecting her daughter. In the end, despite the character’s lunacies, I find that it’s in line with many human emotions , thoughts, and feelings that make this show truly, a classic worthy of further literary study.