Because Kantoku is forever a perfect choice for an anime blog.

I seem to do quite a few meta posts that focus on specific aspects of the human psyche and behavior in the animanga context, so from here on, I will be prefixing such posts with the term “Analysing”. Yay for my supreme creativity.

Now, on to the main topic.

The school uniform is an unexplained fetish of many men across the globe, to be hidden away behind closed doors or only confided to close friends, sexual partners and, in some cases, the greater part of the Internet. Recently, however, as I was casually eyeing a group of nubile female students on the bus, it struck me: Why the school uniform? After some careful consideration and research into this not-terribly-important subject, here are my opinions.

However, before I proceed, let me first detail the theory of the Male Gaze. Filmmaking, being a decidedly male-dominated sector, is often done from the perspective of the male mind – angles, scenes and props are chosen to display the woman as an object to be looked at. In anime, this would be evidenced by skirts that, no matter how long or heavy, would always be blown up by even the slightest gust of wind in a manner that would put Marilyn Monroe to shame; the tendency for massively oversized mammaries that exist on a plane unaffected by the standard laws of physics; also a general rule of thumb that female characters should dress in completely awkward manners that cater to as many fetishes as possible. This is, of course, all done very knowingly, as most anime’s target demographic is quite male in nature.

With that out of the way, my discussion focuses around two fundamental driving factors behind the male gaze: The idea of superiority, and the idea of objectification.

1. The school uniform masks the personal identity of the subject.

Image by Tamura Hiro, feat. Miyanaga Teru. No, no one knows who the yellow-haired girl is, either.

Normal humans, being the hairless earth-skinned beach apes most of us are, seek to express our individuality through the most accessible and visible way possible: Dressing. The school uniform serves as the counterpoint to this, forcing students to give up their individual preferences for the sake of institutional conformality. With this, the notion of the “individual” is downplayed. People are thus able to view them and consequently lust after them as objects,defined by the uniform they wear.

2. There is a certain illusion of innocence and naivete that comes with the donning of the institutional outfit. 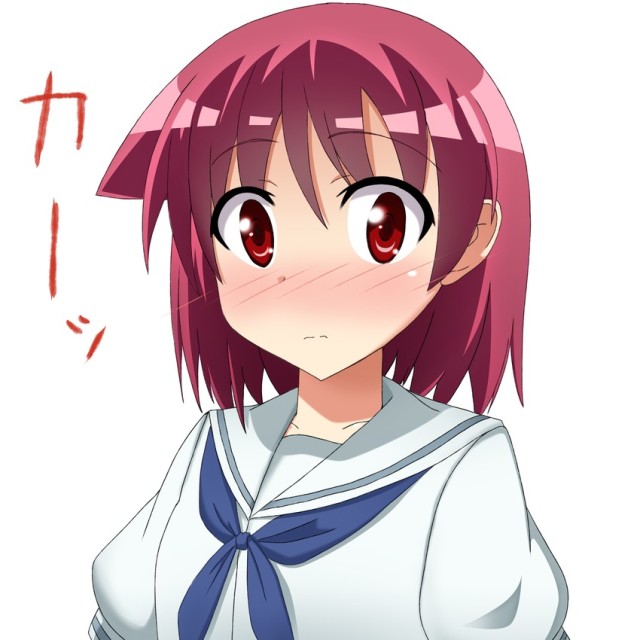 For various reasons, all of the pictures for this post (excluding title) will be of Miyanaga Teru.

While the individual in question might not be, the outfit conveys the illusion of naive innocence and youth, tempered in us by both societal and personal experience. This plays with the male wish for superiority, where the individual is able to view himself as above the student in terms of intellect and worldly experience, based purely off the image given by the uniform. Some men are also attracted to such innocence (notably often the same kind of men who wield the Pedobear seal of approval) and, of course, the imagined act of defiling that illusion. Just see the amount of lolicon manga we have circulating around the ‘Net.

3. While the uniform masks individuality, it does not completely block it off from public view. 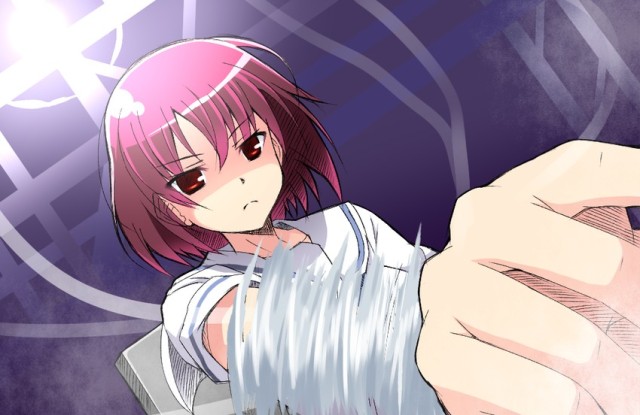 The third point stems, surprisingly, from the individual. Little fragments of the self escape through the colour and cut of the hair, accessories, bag, type of shoes, and most of all, the behaviour and gait of the individual in public. The result is an image similar to that of a freshly budding flower – a fragile, unstable existence. This once again plays to the idea of superiority.

You see, if those school uniforms weren’t holding back most of her power, Teru would probably be doing this in Saki Achiga-hen right around the second-last episode. DN on pixiv, http://www.pixiv.net/member.php?id=1778800

The counterimage is here defined as the contrast between the image portrayed by the institutional outfit (the school uniform) and the personality or activity of the character. For this reason, there exists in anime numerous variations of the armed schoolgirl – whether with swords, guns, lances, explosives or just badassery in general. In my opinion, it is the contrast between the institutional and innocent nature of the uniform and the ruthlessness that comes with weapons or unarmed combat, or also possibly the male nature to fancy those who share similar passions with them, i.e. sport, or, in this case, weaponry. This is, of course, out of the scope of discussion, but it does happen to be a valid point that deals with how male attraction works.

There are other fetishes that exist within the very scary place that is the male kink list (the last time I saw a list of H doujinshi tags, it numbered at 694). The school uniform, however, does fall under the more popular category. Above I’ve listed some points that I find relevant, but perhaps you have some other ideas on why the school uniform serves as such a strong fetish for males? Please do list them down in the comments below.

"Any sufficiently advanced application of locupletative language is indistinguishable from writing magic."
View all posts by Carillus →
This entry was posted in Editorials and tagged fetishes, Meta, miyanaga teru, Saki, School uniform, some research was done. Bookmark the permalink.

14 Responses to Analysing: The School Uniform