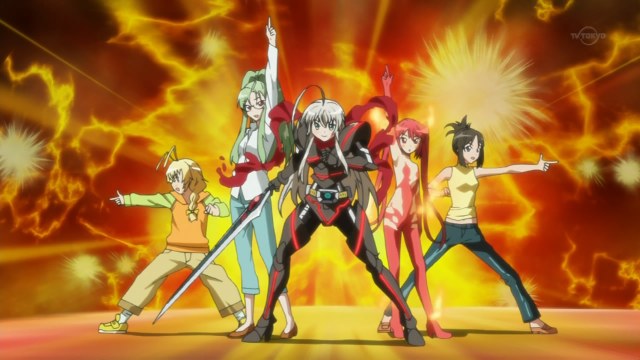 This actually sums the show up pretty nicely.

Story: 6
At face value, turning Lovecraftian gods into bishoujos (and a trap) appears to be rather creative, but at the end of the day, it really is conceptually no different from those genderbent “Sengoku period” shows. Nyaruko does, however, bring something new to the table, so it has some sort of advantage over them in my mind. Admittedly, I have yet to watch a single one of those Sengoku shows (they haven’t looked particularly interesting), but I digress. In the end, despite its apparent novelty, Nyaruko still lacks a very immersive story. Given its listed genres, though, this shouldn’t come as a surprise.

Production: 6
Average stuff. The OP is reaaaaaaaaaaally catchy. I like it.

Comedy: 7
Nyaruko is just plain silly. The show does devolve into a (somewhat) generic harem after a while, but I still had my fair share of laughs… which brings me to the next genre.

Parody: 7
Ah, parody. Your mileage may vary. I get that Nyaruko makes a lot of references. Well, that’s an understatement. Nyaruko is apparently chock-full of references, and I say “apparently” because I honestly could not spot a large majority of them all. Or at least, I believe that to be the case; I watched a NND video reposted on YouTube of someone pointing out every reference in episode one after watching that episode, and I was just blown away. This really is the only factor that brings Nyaruko down, though, and to be honest it isn’t technically a judging criteria and more of a personal one.

Overall Rating: 6/10 (Above Average)
Nyaruko manages to be unique enough to be above average. Don’t come expecting an interesting story as a result, though. Instead, you should expect to chuckle every now and then at the ridiculous situations that Nyaruko and co. get themselves into. And of course, you should also give yourself a pat on the back for every reference you spot, because believe me, there are a lot of them. If you aren’t particularly revulsed by the thought of what is essentially a chaotic mass of tentacles attempting to procreate with a boy, then I would recommend giving Haiyore! Nyaruko-san a go. With sufficient lube, it can’t hurt much more than tentacle rape.