Senki Zesshou Symphogear Episode 1: Songs can save the world and the anime 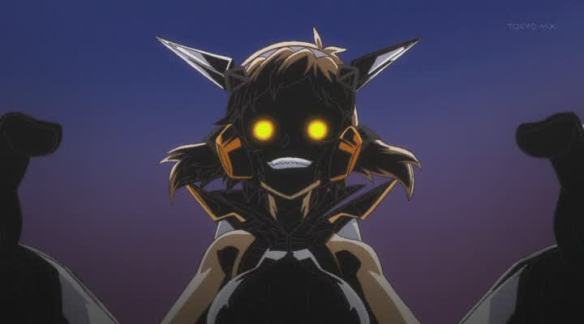 I was about to spend the entire post singing seven thousand praises to Nana Mizuki but apparently this episode was that bad that I have so much I wanted to talk about. In fact, I find it so bad that this is the most amazing and awesome anime I have watched in years. THAT BAD.

I have no idea what I’m writing about anymore, I enjoyed the episode a lot actually, despite how bad I think it is.

On a side note, you won’t be hearing from me in the coming weeks, mainly due to my GCE O level results releasing tomorrow afternoon. In fact I’m only writing this because I can’t sleep…

Its pretty funny, if you watched the PV you would think that all 4 girls were main characters; when the anime started, Hibiki is already in her grave (the Ohana Matsumae look-alike voiced by Yuki Aoi) and Kanade (you know, the red-head) pretty much died in a depressing self-sacrifice with unlimited blade works (a la Kyouko style, she disintegrated with a smile.) to save Hibiki about halfway through the episode. 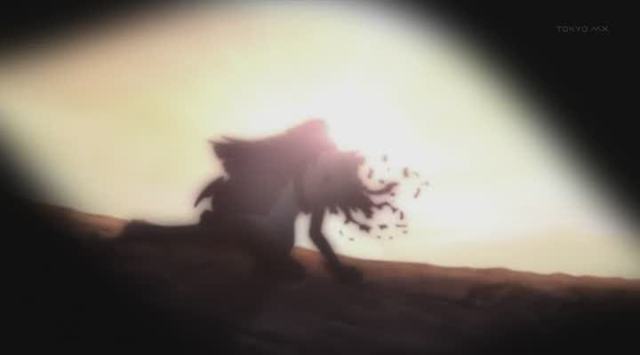 No matter how I looked at i, I couldn’t help but think that maybe Hibiki died in some Madoka-ish manner… Maybe its the seiyuu.

Then they started tripping yuri flags everywhere. Like that encouraging hug Kanade gave to Tsubasa (d’aaw) or the fact that HIbiki and Miku sleep in the same bed. I mean they sleep in a bunk bed which makes sense but on the actual same bunk and under the same blanket on the same mattress? The second coming of Nanoha and Fate’s rabu rabu Riot 6 room. 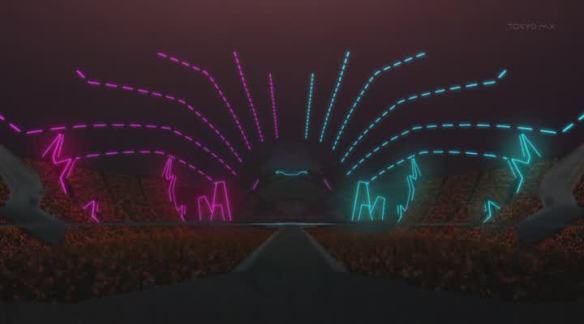 Just by looking at the colors, you'd think they'd pop onto the stage and start singing Magnet... Obviously a coincidence that one of the characters is named Miku.

Just what was up with the animation… I mean it isn’t that badly animated… But it was just bad. The live scene was completely unimpressive (I think I’ve seen better animated Danceroid videos on youtube) and I’m completely underwhelmed by the fighting scenes. Why was there the random pauses with the scroll shouting out the attack names… It kind of killed the mood and made me laugh… The animation sequence was totally uncreative and typical too.

Plus, who the heck designed those Noise monster alien things… they’re like awkward giant globs and weird monsters with negative filter placed on them…

The background was averagely (according to spell check this word does not exist) done and the characters were pretty shoddily drawn too: complete flat colors, thick lines, meduka quality… Sure, satelight didn’t really get much shows until now and juggling Moretsu pirates, Aquarion EVOL and Symphogear might be quite a challenge but still, it’s not like they aren’t experienced with animating concerts. They did do Macross and Basquash after all and this, in general, was just BAD: 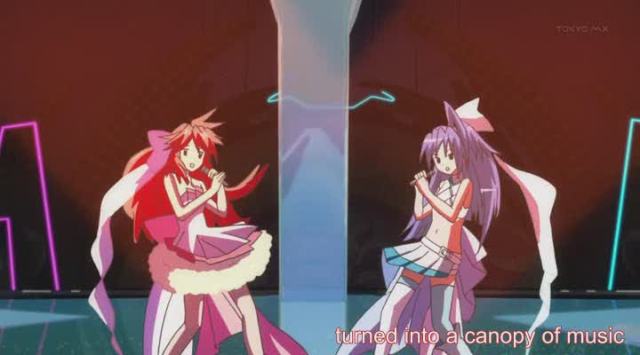 Then comes the main selling point of Symphogear: the cast and the music.IT IS and anime about how singing create phonic resonance with creepy fossils to fight aliens after all.

Anything composed by Agematsu Noriyasu is fine with me. Anything Nana Mizuki is definitely fine with me; especially if she’s singing. What more, obviously people look forward to Aoi Yuuki singing (singing properly anyway. Her character song for GOSICK’s Victorique makes Rebecca Black sound good; justified she’s singing in character) and Minami Takayama (ie. Conan Edogawa) actually sings really great its such a pity Kanade died before the first episode even ended.

And it appears that Ayahi Takagaki (who sings opera…) gets the ED which should probably imply that her character could get a singing role (although this might be a red herring seeing as how both Kanade and Hibiki died and will die).

Anyway, Tsubasa can pretty much hold solo concerts and the plot can completely ignore the Noise and any other characters for all I care. They can even loop this song for the rest of the episodes if they wanted to.

In Hibiki’s word’s “CD! CD! Tokuten! CD!~” : Synchrogazer releases on the 11th of January (although I know the leaks are already out). I wish I could afford the single but I just spent $23.70 on The Museum II at Popular’s CD Rama today AND THEY DIDN’T GIVE ME MY A4 FILE WITH NANA MIZUKI ON IT… *rant end*

Honestly, I think Symphogear was like a bunch full of clichés and bits and pieces of other anime. The whole feel was like watching an anime from the 2004-2006 era which was actually one of my favorite anime eras I suppose the bad animation is bringing back nostalgia for me.I’m seriously hoping the rest of the episodes would make dramatic and exciting turns and not just Miku getting jealous of Hibiki and Tsubasa (you know, like Black Rock Shooter) with a dice of delicious yuri.

20 Responses to Senki Zesshou Symphogear Episode 1: Songs can save the world and the anime