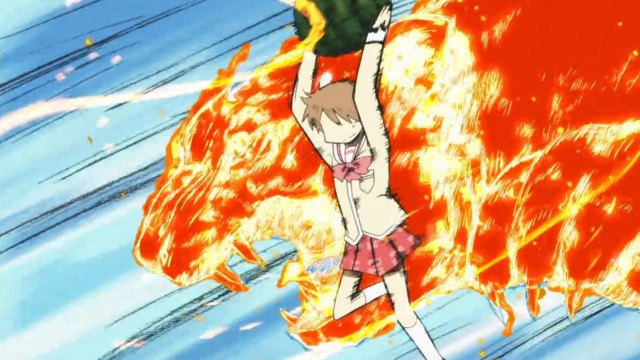 This year had a lot of things to be remembered for this year, and a measly list of twelve won’t do it justice. However, due to me being a guy who has a case of perpetual amnesia, I have forgotten most of these “memorable” moments. So instead, this short list will include 12 scenes, characters, music and shenanigans that left the most impact for me (read: that I haven’t forgotten) this 2011, be it good, bad, or downright disturbing.

Surely you already know by now that this list may contain spoilers from several anime that aired this year, right? 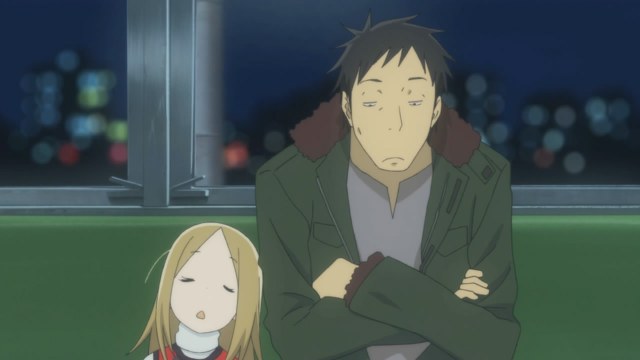 Usagi Drop (or Bunny Drop if you will) is a good show, full of adult insecurities, the innocence of the young, and a depiction of a complicated single parenting in a not too serious manner, just like how things would go in real life. Whatever problem that each of the characters go through are given incomplete, but believable resolutions, not exactly through happy endings or tragedies, but through realistic compromises. I dare say that I agree that even the despised ending of the manga was perfectly built up. 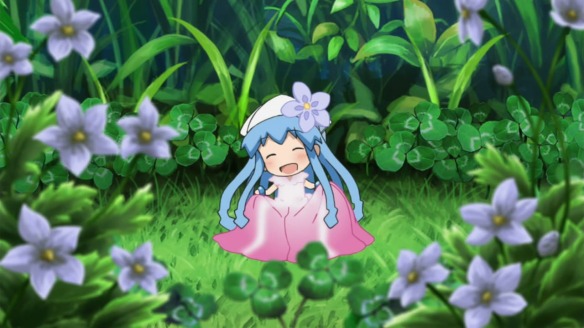 Just give me a reason why this isn’t memorable. I dare you, de geso!

10. Haganai: Yozora putting sunblock on Sena’s back using her feet (hear me out, will ya?) 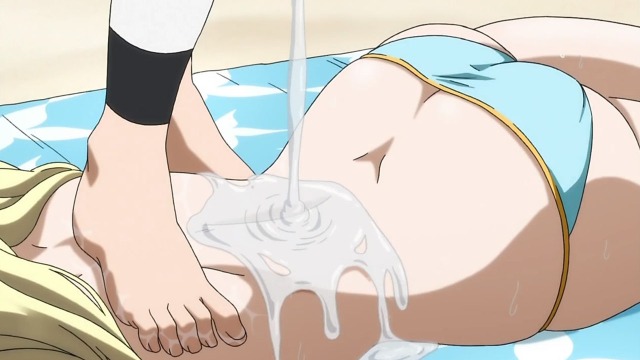 Okay. I was facepalm-ing in the entirety of this skit. It’s just so… wrong. I didn’t know how to take this scene while I was watching it. I really think Yozora needs professional help, if she thinks that she has the right to treat people like how she treats Sena all the time. I don’t know if the creator intended this to be funny and/or arousing, but well… it’s not! It’s very disturbing and it gives me more reason to think that Yozora is a shallow, evil person who gets turned on by S&M. (Rika being unconscious while this was going on didn’t help either.)

After I finished the show, I had a little more respect for Yozora, and my thoughts were the cliched: “Wow, maybe she isn’t such a bad person after all,” but it still doesn’t justify all the crap she makes other people go through.

Though Kyouko’s presence shouldn’t be much of a surprise since it’s the name that you will hear the most in the series, it’s ironic that the character who is always ignored and bullied by the production team and the cast themselves should be one of the most memorable characters of 2011. The fact that Akari is always being ignored made her memorable. Maybe I’m just mean. 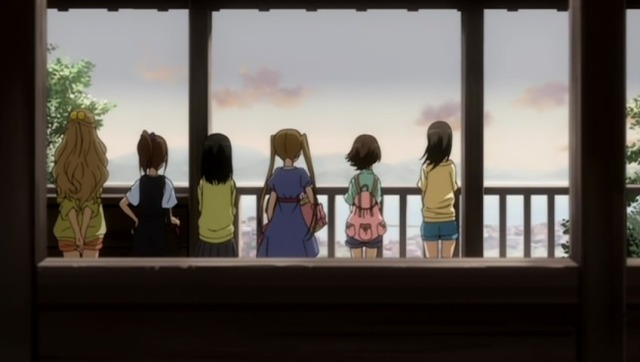 As the saying goes: “It’s the small things in life that make it worth living.” This couldn’t be more true in the case of Tamayura. Our characters certainly made the most out of a very humble setting, which, in all aspects, pales in comparison to Aria’s.

Enjoying simple meals, attending a small festival  and most importantly, the memories shared with one’s close friends, both happy and sad ones, all immortalized by captivating and well-chosen shots with an old model camera. Yes, this is life in a very simple nutshell.

7. Madoka Magica: The clash of idealism and pragmatism 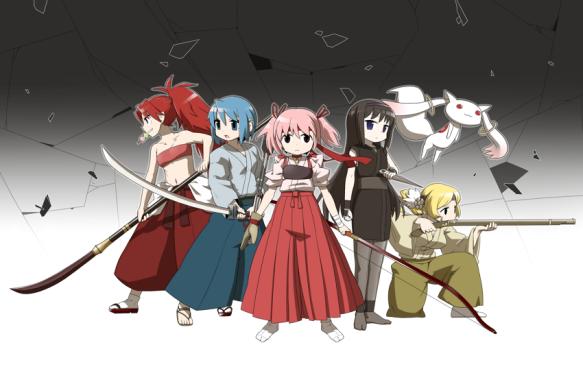 Madoka Magica offered very nice clashes of conflicting mindsets, the most beautiful example of which is the conflict beween Sayaka and Kyouko. Someone would depict Sayaka as a stereotypical superhero, selfless and has a solid sense of justice, while Kyouko would be someone that you would call a dark knight, bordering on being a villain, with her twisted, yet logical approach to the treatment of human life and matters regarding interpersonal relationships. The two meet and and cannot agree to disagree with each other, and it led to a not-so-good relationship between them.

I could go on, but the point that I am making is, these kinds of conflicts are reminiscent of those debates that we had during high school, and I always love a good philosophical discussion. 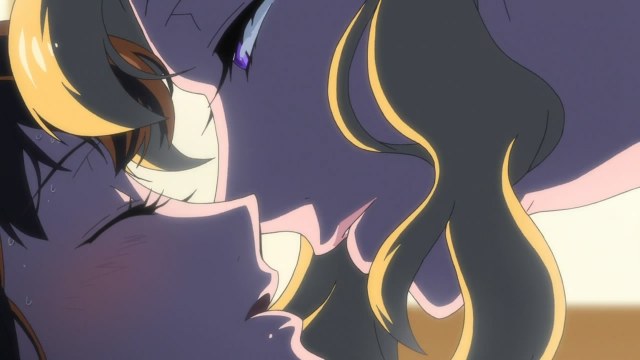 I bet you guys already know that I love yuri (the genre), and this is supposed to be good for me, right? WRONG.

It is this particular scene that made me drop the show. I am still at a loss as to why this scene came out to me as very appalling. Perhaps it was the sense of depravity that came with the scene, because Ringo already had a good, established relationship with that guy who I already forgot the name (NTR is the bane of my personality), or the drugging (ugh…). Yes, I know that it doesn’t really end up like this, but still. I kept telling myself that I should be more tolerant of stuff like this, but alas, I have failed.

Maybe my complete repulsion toward this kind of stuff is part of the reason why I skip most VN H-scenes. 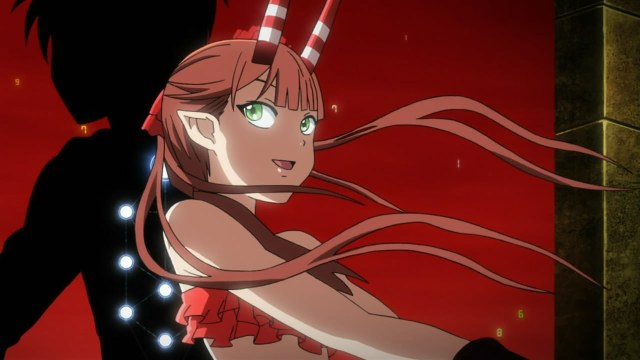 I admit, when [C] was airing, I thought that we were going to have another one for the history books. It was extremely fun and engaging to watch random monsters and random people dish it out with cold, hard cash and ambiguous business strategies turned attack names. I even went to the point of thinking that all those stuff had a grand concept behind them. Well, it turns out that I was wrong, but hey, [C] still remains to be one of the most entertaining wastes of time that I have ever seen, and I don’t mind that one single bit.

5. Lotte no Omocha!: Kousa no Quotation (Quotation of Crossing) 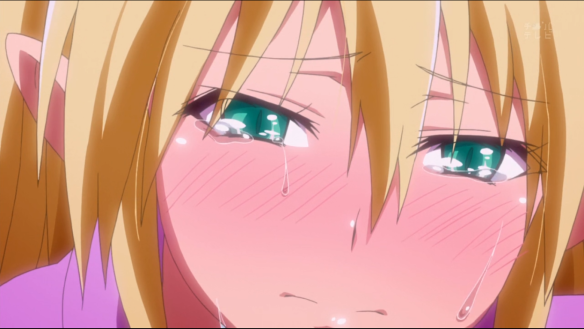 I think I had the same face as her while I was watching this scene.

I have to admit that I, too, have misjudged Lotte no Omocha on the basis of its synopsis (they should do a better job at writing those). While the show continued to shatter my expectations, there is this scene in the 5th episode (the part where Naoya and Asuha went into Mercelida’s room) where I simply lost it. Before I knew it, my vision started to get blurry, and lo and behold, the anime managed to wring tears out of me.

Well, I’m a person who yawned at those DORAMA moments of AnoHana, but still cries like a baby with every rewatch of Clannad After Story, so take that as you will. 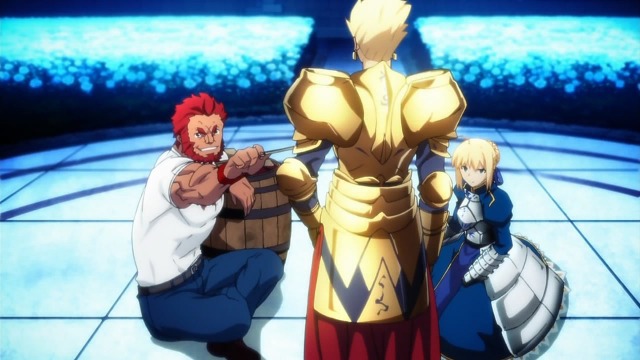 Ahh, it’s during these times that I really want to meet Mr. Gen Urobuchi and have a talk with him about many, many topics. I’m with Saber on the belief that a ruler is one who serves the people, so seeing Rider own Saber through his words is like a thorn in my throat. After this episode, I spent a good amount of my time reaffirming and assessing my stand on this particular topic after watching said episode, and thankfully, I can still stand by it.

3. Nichijou: Random comedy at its finest

This may be just be me, but I think Nichijou is one of the best comedies Japan has ever come up with. I know I hold a couple more comedies above Nichijou, but in terms of the means that Nichijou handled its comedy, which is, arrange random gags (which, I think, would not be funny if they’re not from Nichijou) in such a non sequitur fashion that draws out the best in them, as well as the eccentric behavior of almost all the characters all fit so well with the utter lack of flow and logic that the show had.

Simply put, I had a blast being confused while laughing my pants off.

He is one of the best anime characters ever. Need I say more? Yes? Okay.

Even at the start, his mad scientist persona, and the way he treats those around him is what drove the otherwise bland start of the series. He’s quirky, funny even. It would still have been a blast even if Steins;Gate were a slice of life series.

But no, Steins;Gate just had to go further. His persona was slowly broken down by the events of the story and slowly integrated into his very personality. By the end of the series, you won’t laugh or scoff at him when he does his absurd poses – you’ll think they’re completely awesome.

1. The best anime experience I have ever had since Clannad After Story

Who saw this coming? Everyone? Damn…

The more time passes, the more I appreciate Madoka Magica. It’s a simple yet masterfully-written story about ordinary young girls and their beliefs put in a harsh and cruel system bound by the curse of fate. It has elements of a classic Greek tragedy (severe consequences born from human actions) with a lot of themes that challenge the common notions about the very basics of morality and ethics, the concept of heroism, the value of a miracle and the significance of a sacrifice, all while incorporating the concept of hope seamlessly within all that cynicism. Not to mention that the art was very unique, the soundtrack was wonderful, and the animation was better than most of the stuff I watched. Madoka Magica is hands down the best anime experience of the year.

But the most important aspect of it all is, blowing all the other elements out of the water, the Homura x Madoka shipping! Hahahahahahaha! 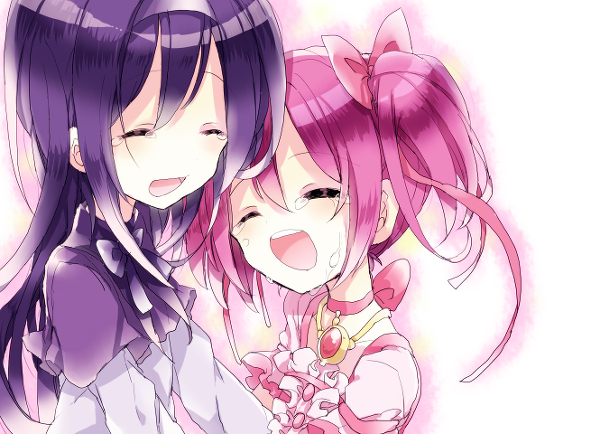 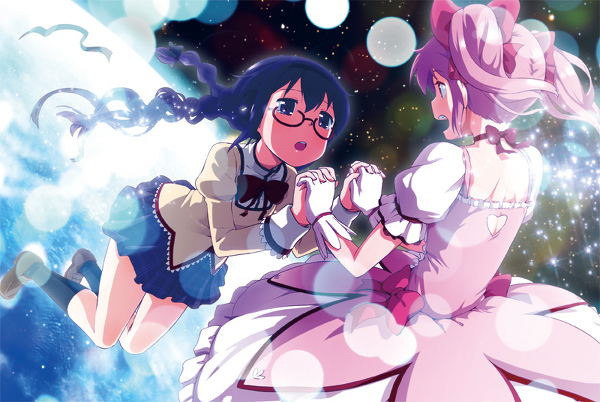 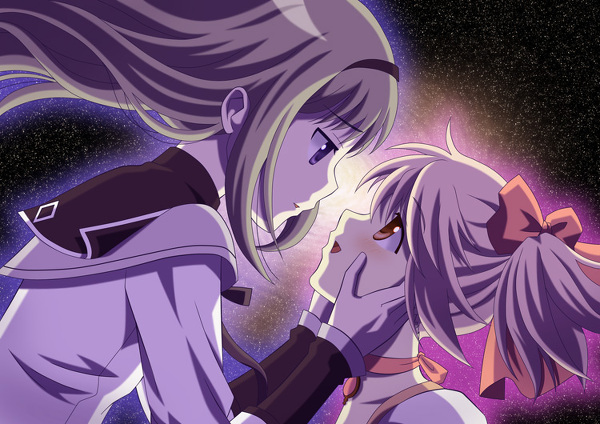 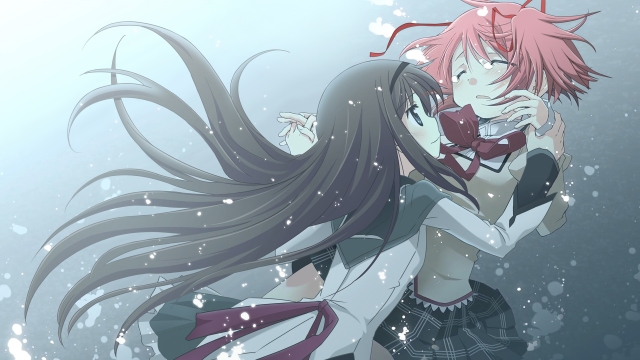 From the Japanese Photoshop masters.

So that concludes my little post. I hope you had fun reading these useless ramblings! 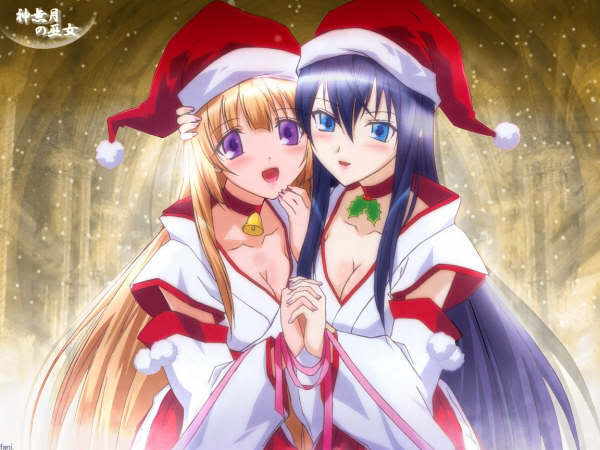 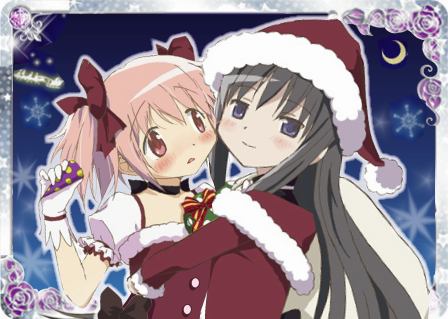 *Almost all screencaps are credited to Random Curiosity. HomuMado Pics are taken from Pixiv unless stated otherwise.