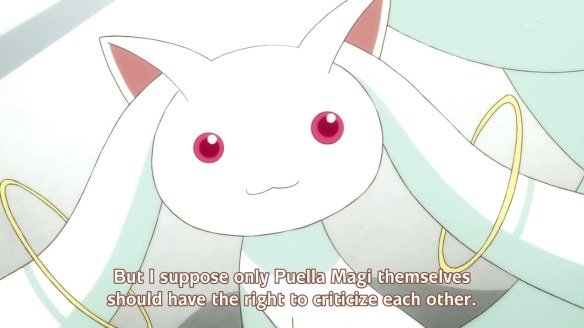 What’s a Top 12 list without the modern classic PMMM?

When Puella Magi Madoka Magica/ Mahou Shoujo Madoka Magica was first announced, I bet I wasn’t alone in being interested in the fact that it was a Mahou Shoujo anime made by SHAFT. The adorable, slice-of-life feel of typical Mahou Shoujo and the dramatic, mature feel of SHAFT didn’t mix well. We were proven wrong of course. 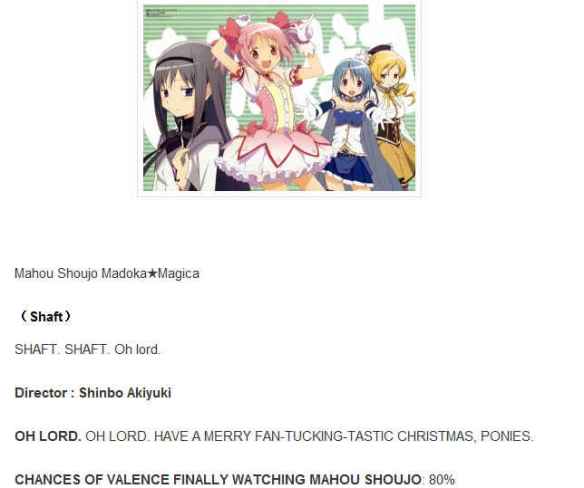 Less people realized that Gen was on the team, and by episode 3 the show took the aniblogopshere by storm. Decapitation? In my Mahou Shoujo anime? The show soon rapidly evolved into a deeply philosophical and thought-provoking anime. Each episode brought with it more speculation, and with more speculation, more discussion, and with more discussion , more fans. Not to mention more hate for our cuddly little white mascot. It soon became one of those ‘must-see’ anime for fans, up there in the ranks with Haruhi herself. It was practically instantly a classic.

What did I like about it? Aside from canon Homura and fanon homuhomu (especially the perverted ones), the thrill of watching it was intense. The whole blogosphere was filled with discussion as we waited eagerly each week for a new episode. Now, the reason I don’t do episodics anymore was because I found that I liked marathoning anime all at once. Even if it was a thriller or anything like that, I would still watch it. This one –  I simply couldn’t wait for the entire series to finish airing.

I wasn’t even treating the show seriously from Episode 1 to 3, to be honest. After Episode 3 aired, I posted every time a new episode came out. I took to the web and posted speculation. I speculated over every plot detail, I examined every plot hole in hopes of finding a twist only to have them all resolved. I found the posts circulating about 4chan in speculation threads of their own. It was so…absorbing. 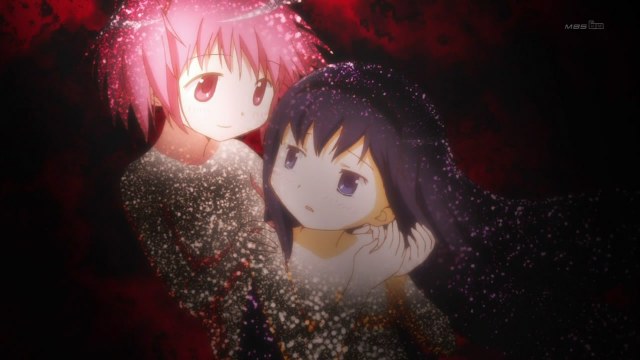 To quote @fkeroge: “There are in fact, anime and manga targeted at a more mature audience; those that showcase technicality, darker themes and even socially relevant issues. Some examples of these anime include 1995’s Neon Genesis Evangelion, Code Geass of 2007, or the recent Puella Magi Madoka Magica aired this 2011. These kinds of anime are considered to be for a more mature audience as they contain high amounts of violence, profanity, and a certain amount of suggestive and dark themes. These anime franchises were very popular in Japan, even among the non-otaku crowd.”

I suppose this is true. Like one of those outliers, it doesn’t really take an otaku to see the brilliant writing that went into the show. (Fuck your idea for season 2, Shinbo.) The clashing of good and evil, the blurring of the line between them, and the great confusion in defining the two, as good becomes evil and evil becomes good – the show’s really thought-provoking and entertaining. People can watch it just for the fight scenes if they so wish to, or watch it along the lines of other shows such as Serial Experiments Lain, Boogiepop Phantom or even (snigger) Code Geass.

All in all, I feel that PMMM was a great show, and it shall remain a modern classic for quite a long time, possibly forever.