Fanservice: Aren’t you tired of it? 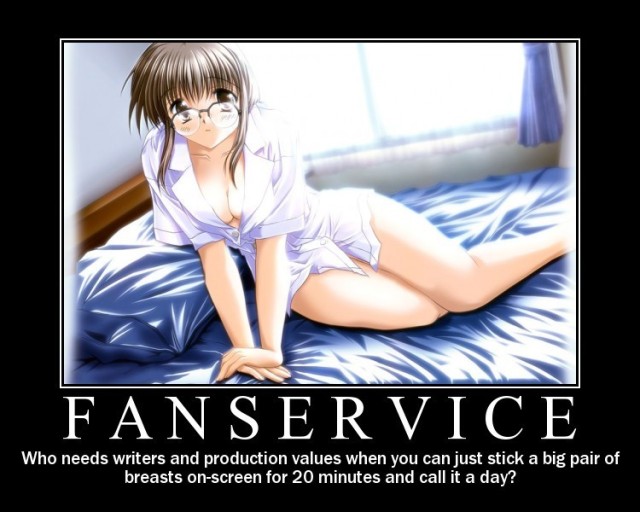 Look, I’ll be honest with you. I’m sick and tired of all the fanservice in anime today. I think it’s really demeaning for girls to see that their animated counterparts are (almost) always the receiving end of “accidental” groping, panchira, compromising positions, master-servant relationships and more things that give anime a bad rap. A healthy dose of it is fine, I mean, what straight guy doesn’t want to see under a girl’s skirt at least once in his life? But sometimes, it just doesn’t seem right anymore. Some of the fanservice nowadays even attempt to mock the female population of the earth by making the characters of most fanservice anime look like utter prostitutes. Even if it is for the sake of marketability, I don’t find it funny anymore.

I don't know what to say about this.

Now you may ask why I’m being a feminist now. Well, I just thought of this when I was Google-ing for first impressions for Hanasaku Iroha. The way I saw it is that it looks to be like some kind of primetime soap opera here in the Philippines (which I don’t really like), but it has this certain charm that I saw in the characters that makes me want to watch it. I applauded it for not having excessive fanservice (if it even has any).

It received positive overall reviews. People, including myself, like the nice art style of PA Works, and the character designs are also heavenly. However, there are still some bad responses. Normally, I would just ignore these, or at least try to understand why they hate a particular aspect of the show, but some comments caught my attention. Most bad responses were not even related to the story or character designs at all. Most of them criticize the anime for lacking their precious fanservice. Negative comments coming from sick sites such as SanCom will make you lose hope in humanity.

This is maybe why anime was on a decline during the recent years. There was just too much fanservice, and some anime fans want more out of their anime than an animated version of a pervert’s delusions. We should be thankful for titles like Madoka, Nichijou, Ika Musume and the wide selection of ecchi-free anime this year who dare not to compromise quality for marketability.

I think this is a better way to do it.

Now, I leave you with a question. What do you think about fanservice in anime today?

Trying to change for the better.
View all posts by Lucas Magnus →
This entry was posted in Uncategorized and tagged Anime, Anime, Ecchi, Fanservice, Hanasaku Iroha, I'm sick and tired of this., issues, Rants, Why?. Bookmark the permalink.

73 Responses to Fanservice: Aren’t you tired of it?