Twelve Days of Anime: Day Nine – My little sister can’t be this cute

You might to read up on other bloggers taking part in this, including Aorii, 8C, prototype27, Scamp,schneider, the cast at Borderline Hikkikomori, TWWK, Landon, Janette, digiboy, drmchsr0, doctordazza,

Be sure to visit Canon too (Links courtesy of Canon)

For what seems like 6 episodes I’d been asking myself how they’d manage to come up with a character with hardly any balls to defend himself against someone younger than him, and how they seem to lack common sense. I was almost betting that nothing would change even at episode 12.

Everything stayed the same.

The ending was all-too-predictable ( and a tad lame, actually),  something I’d thought of when episode 4 was just released, and everything seems to be the same more or less. It wasn’t a spectacular show, nor was it brilliantly fresh and unique. It was fine. Yet I enjoyed it so much, I feel like I lack common sense too.

It didn’t make any sense. 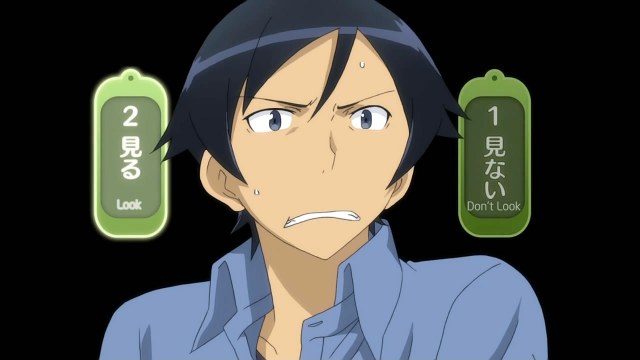 Given how I rate my shows, this show would have been sub-par, if not slightly veering off the average line.  I would have dropped it halfway. I would have watched something more interesting, and avoid the show like the plague from then onwards, or something along those lines.

Yet there seems to have been something to trigger my inner fanboy – trigger my irrationality.  I simply have no idea, but I’m hooked. Perhaps the answer is a tad obvious and shallow. But whatever, now all I need to do is wait for the ‘True End’ to come out.

You know you like something when you read too deeply into details. Some sources of speculation or points of interest:

The year it is set in is 2012. Meaning to say that unfortunately for Shin, he’ll have to settle for a wife half his age, at least.

The bait is placed, the trap is set. Knowing AIC, I bet this is all just a troll anyway. I’m so pessimistic, I’m willing to guess that the True End focuses on Kirino too. Maybe he’ll get with his tsundere dad instead. (Now we know where all the tsundere genes come from in the family.)

>(as pointed out on the MAL.net forums ) that serial number

Well, at the end of the day I still have no idea why I like this show. Its storyline is choppy, its themes so predictable, and if it weren’t for Hanazawa I would have dropped this ages ago. I didn’t particularly like Kirino, nor did I like how Kyousuke was basically kind of a pussy who let his younger sister trample over him like a dog’s chew toy. I wondered why the characters that were nice were pushed to the side. I wondered plenty of things.  It wasn’t fresh, it wasn’t particularly original for an otaku-centric anime, its ending was hardly satisfying, even. It was simply 3 or so minutes of stupid drama pulled out of nowhere and that’s an ending? By any standards this show would have flunked miserably.

I’m still looking forward to the extra episodes though.

I blog things.
View all posts by Valence →
This entry was posted in 12 Days and tagged 12 Days, Ore no Imouto ga Konnani Kawaii Wake Ga Nai. Bookmark the permalink.

24 Responses to Twelve Days of Anime: Day Nine – My little sister can’t be this cute