(You might want to read up on the other Twelve Days of Anime posts around the aniblogosphere, including those from Aorii, 8C, prototype27, Scamp,schneider, the cast at Borderline Hikkikomori, TWWK, Landon, Janette, digiboy, CCY, and more!)

Angel Beats! must have been a horrible show to some. Some criticize it for its poor storyline, its rushed script, its development’s shoddiness, amongst tons and tons of other reasons people use to explain why they dislike the show. But I, for one, enjoyed it thoroughly.

So here I was, watching Angel Beats!. I remember some of my initial thoughts:

Hey, this is kind of like that Clannad…oh wait never mind.

Woah, there’s a entire group of people whose lives revolve around killing some girl – that’s some dark humour, right there.

Amongst others. As you could tell, I did not really like the show at first.

But being the idiosyncratic person I am, I started truly liking the show the moment some hated it – the moment when Kanade revealed her intentions all this time, and when Otonashi decided to help her send his friends to the next life. Some said it was rushed, too sudden, too random. I liked it. It made perfect sense to me.

I mean, why else would she be fighting? They are eternally fighting, for reasons beyond comprehension. Does she aim to kill off all non-NPCs? Doesn’t make sense- she’s a non-NPC herself. Does the SSS aim to defeat her? Yes. It’s an eternal struggle, a endless fight, yet no-one ever paused to think.

She never kills anyone, does she?

Unlike Naoi, who wanted to exterminate the SSS, as far as I know, most of the time she doesn’t injure anyone at all – constantly defending herself, alone and solitary. Notice that she doesn’t actively seek the SSS out : she only seeks them out after they start their activities. And when she does seek the SSS out, it’s a once in a blue moon affair.

Could you imagine how sad she was , alone and solitary? Eating mapo tofu alone – that’s amazingly sad in retrospect.

Then I recalled that she stabbed Otonashi. Well , in the last episode, BOMBSHELL DROPPED. Everything is revealed. The reason why the show is titled as such, the reasons behind everything, and everyone goes into the next life.

I shed a tear.

It was here that many things began.

For one, I started to enjoy Hanazawa-voiced roles. She has this unique ability to change her voice so much, from the toneless, kuudere voice of Kanade to the sly Zange-chan. Her voice range is amazing.

If you recall, ages ago, the header for this blog had been nothing but a gigantic closeup of Kanade’s face. I had convinced myself that she was my favourite character, but being the idiosyncratic person I was, I found that that would change, but nevertheless, she would forever be one of my favourites.

And if KKNM doesn’t fail me, soon Kanade , Otonashi and Yui will join the ranks of my plastic army. It was just too nice to pass, that Nendoroid set.

In the end, I still say this: I admit, the show wasn’t perfect. Nothing is.

….but what made the show enjoyable?

The characters were fun to watch, especially the duo of Kanade and Otonashi. Naoi rhymes with Yaoi, and Yuri was pushed to the side, but nevertheless, I enjoyed watching the entire thing. Even that scene when Yui goes berserk with the notion of being God.  I don’t deny that the characters could have been better. Everything could have been better. The show was admittedly too rushed, with rumours saying that the plot and script done days before the airing of some episodes, and the last episode completely changing all of the characters, making Yuri nothing but a normal school girl and that singing of the ‘Mapo Tofu Anthem’ cracking me up too much. There were numerous scenes of QUALITY in the show too. Many things could have been improved.

The music was great, needless to say – it’s you-know-who, after all – how good , exactly is it? I’ll leave the explanations to someone else. 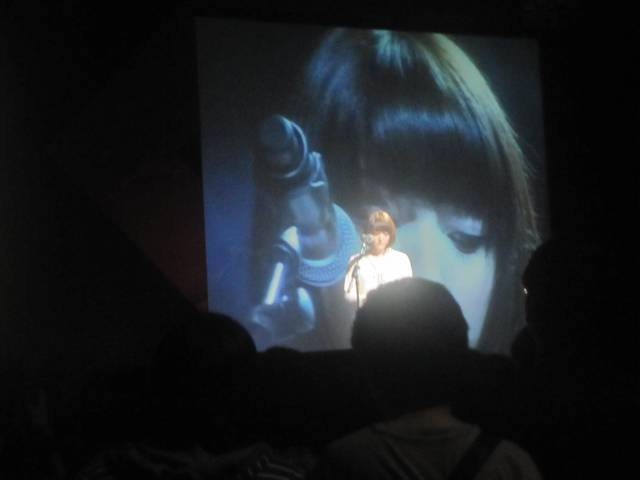 …….So here I was , at AFA X , and like the throes of audience members seated so darn close to the stage, I was secretly snapping photos while the staff members weren’t near, watching Hanazawa talk about herself on stage, and moving on to live dubbing.

And what did she choose to dub? The Kanade scene , in the last episode of Angel Beats.

I shed a tear.

I blog things.
View all posts by Valence →
This entry was posted in 12 Days and tagged 12 Days, Angel Beats, Anime. Bookmark the permalink.