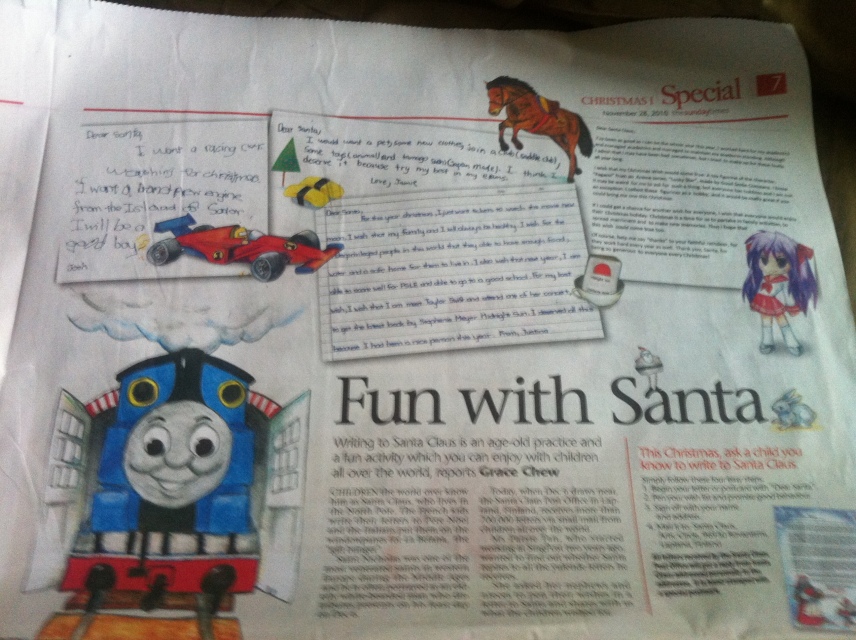 Today, The Straits Times ran a special issue, and one of the articles included inside talked about writing letters to Santa. Of course, I had known about this article previously. My aunt had asked me to write a letter this year, and after putting lots of thought into it, I submitted it. (The Straits Times, CHRISTMAS I, PG 7, 28/11/10.)

However, imagine my surprise (and laughter) when I saw what got published instead.

Probably wasn’t very surprising, but they published the letter I wrote to her when I was like, 13 or 14.  Firstly, some thoughts.

I vaguely remember writing that letter wishing for , of all things, a Kagami figma simply because I was really just beginning to get into figure collecting back then, Kagami being one of the first figmas I had ever laid eyes upon (mostly because of this site) and not only was it from the first anime I had watched, it was also constantly out of my reach. Besides, I had nothing I really wanted for Xmas anyway, so I figured, ‘heck, why not.’

My aunt had asked me to write a letter to ‘Santa Claus’ for X’mas presents, and being deductive ( and poor at time management) I hastily typed a letter for submission, with the full knowledge that it was because she was probably going to buy it herself. And as I type, Kagami stands on my bedside table. Back then, I thought she wouldn’t actually use it for The Straits Times, as she had claimed. I was certain that no-one would read my hastily written, childish letter.

Well, I was wrong. It did come out today, along with some letters from my relatives, all , for some reason, from last year as well. My youngest cousin asked for a racing car and a Thomas the Train toy, while my other cousins asked for a multitude of items, among them tickets to New Moon, tamago sushi and a pony (it’s true.)

So what I would like to introduce to you guys is to ask a child you know to write to Santa Claus. He/she can be 5, 10, or even someone’s inner child – any child you want – to write a letter to ‘Santa Claus’ , or more specifically, the Santa Claus Post Office, located ‘Santa Claus Arctic Circle , 96930 Rovaniemi, Lapland, Finland.’

Not only is it a good way to exercise the child’s writing skills, it is also a nice Christmas surprise to get a reply from ‘ Santa Claus’ – something to liven up this Christmas for the kids. (It got my lazy brother to write, I’m sure it’ll work on any other young child.)

I know, Christmas is almost a month away, but well, let’s get crackin’?

EXTRA: Can you guess what I wrote about this time?

17 Responses to Christmas Letters to Santa