If you were looking forward to BRS 2, I’m sorry, but you’ll have to wait much, much longer. According to GSC President Aki Takanori’s twitter, the rumour that BRS 2 was confirmed that was spread through twitter was false – the fact was that BRS 2 had not received approval yet. 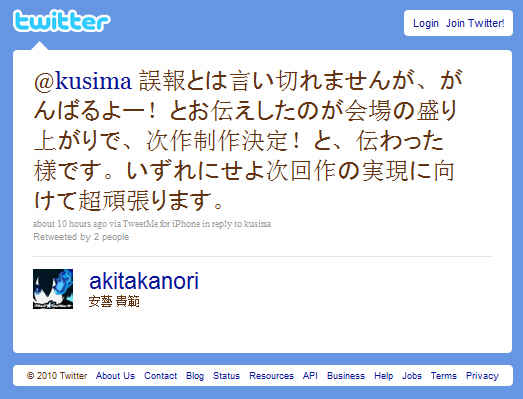 @Kusima It’s not that there is no possibility of a sequel to Black Rock Shooter, but our eagerness in making a sequel had been treated as an official announcement in AFA. Nevertheless, we’ll work towards getting a sequel.

So in other words, a sequel to BRS is unconfirmed : meaning that the possibility of no sequel at all is still entirely possible.

I blog things.
View all posts by Valence →
This entry was posted in Uncategorized and tagged Aki Takanori, Black Rock Shooter, Problem?, Twitter, You jelly?. Bookmark the permalink.