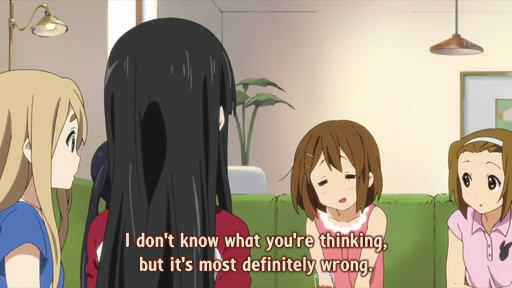 I feel rather depressed, really.

Why? It’s not like it’s because I’m doing very badly in school or anything. Have you ever felt the feeling of subscribing to a particular activity, spending your time and giving your all to it, and when the time comes for you to be tested, you lose everything? This overwhelming sense of ‘betrayal’, although you clearly know it isn’t as such? And everyone you try to talk about this, you feel sad, and they probably feel disgusted.

No joke, really. I used to troll against it, write long walls of flaming text against it, promote anti-K-on-ism throughout the internet and to my friends. I’ve spent so much time derailing it, but today this shall probably stop.

I had an enormous backlog of K-On episodes, and when I got around to watching the new OP, I saw this: 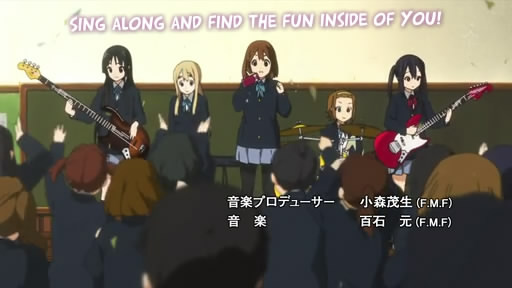 I was enlightened. The reason why so many people probably like this series – and I don’t – is because to watch it, you probably have to take it easy. I’m too serious and over-critical  – after all, K-On is just mindless comedy, and I should treat it as such. Why should K-On have any development,plot or themes? It’s slice-of-life! Why am I using this as a point to derail its success – and yet be supported as such? Perhaps we are all misguided.

And I already have a favourite character. 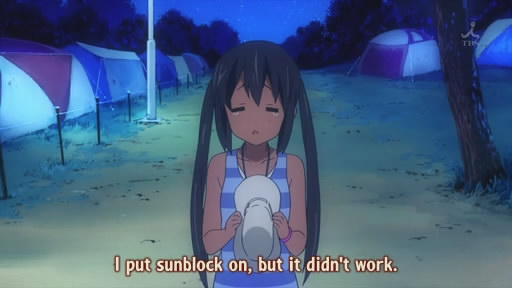 Azu-nyan. She’s probably the character with the best personality in there, for she actually cares for the Keionbu to succeed. She insists on practice, she’s always the one with her head in the game ; to top it off, she’s cute. The Nendoroid already looks tempting. I need to slap myself soon.

They’re so fucking stupid and random, and I like that.

Not to mention the ED seems to be keeping up with standards. Unlike the OP of course.

I’m currently stuck between hating or liking this series. Perhaps I’ll sit on the fence, for now.

In the meantime, I wrestle with the onset of increased depression.

I blog things.
View all posts by Valence →
This entry was posted in Reviews and tagged Airing, Ambiguity, Anime, Anime, Azunyan, Depression, K-On!, Oh god what is this, Review, Reviews, SON I AM DISAPPOINT, This character is one of my gods. Bookmark the permalink.

13 Responses to I like K-On again? I feel depressed.