Bakemonogatari – a decent way to end the entire series? Chemistry and characterization

My eyes just catch on / Just to these little details / I have no idea.

Bakemonogatari 15 reveals that the cause of Hanekawa’s stress is none other than our protagonist, Araragi. Apparently, she fell in love with him after seeing his vampiric powers in action, and if I’m not mistaken, how he saved her once, convincing her that the feeling was love. While the Cat attempts to get him to break up with Hitagi for Hanekawa, he doesn’t. Being the dumbfuck he is, he follows her instructions to stand under the spotlight -where his shadow could have been seen  – after which, he gets attacked.

Tsubasa Cat figures that if she killed him, Hanekawa’s problems would go away. Being the self-sacrificial gentleman he is, Araragi braces for death, only to realise that if he died, Hitagi would kill her. In the end, he awakens his senses and calls for help from the missing Shinobu, who was hiding all that time in his own shadow. Shinobu subdues Hanekawa, and the series ends with an all-together happy ending. 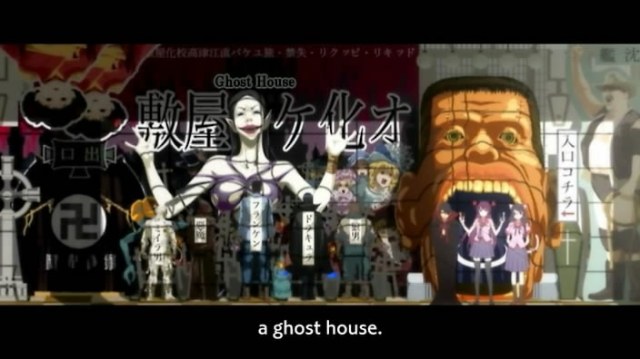 What Bakemonogatari succeeds at is characterization, chemistry and communication. In Bakemonogatari, there were 5 arcs,so to speak. We have Hitagi Crab, Hachikuji Snail, Suruga Monkey, Nadeko Snake and of course, Tsubasa Cat. Each arc focuses on one girl, so to speak. Hitagi could have been mistaken to be your typical tsundere lead at first sight, but of course, she’s not that simple. Instead of being this, submissive, moe girl who does nothing but fret over how to get her often-impressive and stupid male lead. No. She’s a tsundere who is smart, self-conscious and often, the domineering one in their relationship. She may tell all the dry jokes, sure, but she’s often right.  Not to mention, she’s always the one who decides everything in their relationship , from being a cock-tease to ordering Araragi around.

Mayoi and Nadeko, to be frank, might have been cheap ways to include moe and loli fan-service in the plot. As much as I liked the two characters, who couldn’t agree that Nadeko’s arc had not much bearing on the story at all? Now don’t get me wrong – I like her- but really. However, both of them received sufficient characterization in my opinion. Mayoi’s story was sad and entertaining, which admittedly , helped set the stage for why she’s kind of clingy to Araragi. Nadeko was sort of in love with Araragi from a long time ago – perhaps due to his vampiric charisma, as explained by Tsubasa Cat. Hanekawa was well-done as well – for being multi-dimensional, other than your typical glasses-girl. She has actual feelings (gasp) and she turns out to be a very complex character. Without its characters, Bakemonogatari would be nothing, really.

So what does Bakemonogatari do with its characters?

Chemistry. Each character is dynamic in his or her own special way. Like what I said for Hitagi, the other characters are closely related as well. Especially at the end. You can tell that they wanted to emphasize on Hanekawa, Suruga, Hitagi and Araragi. The ending has them cast their shells of foolish childishness away, in the light of their beliefs rediscovered, Araragi ends the series with a sweet footnote. All the characters had interloping arcs, so to speak. Hitagi told Araragi that Mayoi could not be seen -literally. Mayoi kept appearing throughout to help him – or tease him – from time to time. Suruga and Nadeko help out in the other arcs as well. As such, a character web is built. However, Araragi’s sisters, being side characters, were kind of one-dimensional, which is understandable if you look at Bakem0nogatari for what it is – but it isn’t. Each of these ‘side characters’ gets developed as well . As such, we feel close to them. We feel as though we actually know them ;as such we enjoy their relationships and chemistry.

Lastly, communication. Not just between characters, but visually as well. Communication takes up a large amount of screen-time in Bakemonogatari. From seeing them converse, to seeing just monochromatic dialogue screens – you still are kept in the plot, waiting for it to advance. No, not from the wait of yet another episode, but for the episode itself.  You want to know what they are going to say. As such, SHAFT’s visuals come into play. With its dynamic visuals, SHAFT conveys these ideas nicely,leaving a lasting impact on the audience. Its art is well-directed as well, being of high quality and proof of the effort behind each episode.

All in all, the series had its ups and downs, but the show turned out to be utterly dynamic and entertaining. Each episode has its own unique style, each seeming to bring a new dynamic into the show. I hope there aren’t any more seasons , actually – this season was good enough, and second seasons often ruin everything….. 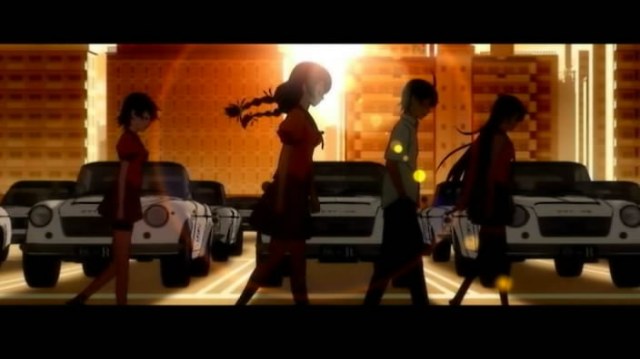 12 Responses to Bakemonogatari – a decent way to end the entire series? Chemistry and characterization