Angel Beats! – REVIEW – The title is one gigantic spoiler after all. Angel Beats.

But anyway. Angel Beats just ended and now I am speechless.

Speechless from tears, as expected from KEY and Jun Maeda? No, speechless in pitiful sadness ; sadness at the show and at what could have been. Normally Jun Maeda manages to pull tears out of my stone face but today he has failed me. Although I admit that watching the show episodically was a bad experience ; it ruined the synergy , the plot, or the emotion in the show. I marathoned Clannad, and I was able to keep in the mood for the whole series, so I admit it: I cried on Clannad. But really, Angel Beats! just made me feel sad. In a good way, like reading unfortunate news that hurts my heart. I just feel emo now.

I guess why Angel Beats wasn’t as tearjerking as it could have been was because of what many other watchers complain about : its short lifespan. 13-episode series for Angel Beats! -wasn’t such a good idea. Jun Maeda’s work usually spans 24 episodes ; the 13 episode run for AB caused a huge quickening of pacing after episode 3. It just went bad from there. We are left with many questions: why did Otonashi love Kanade? Why did he want to make them all disappear? Who was the guy who keeps reminding me of the Matrix? And why does the ending remind me of Neon Genesis Evangelion? And stuff like that.

Jun Maeda achieves his signature tear-jerker effect by character and plot development. Without these , his work is incredibly mediocre : Angel Beats being one shining example. Not to say Angel Beats is mediocre : but rather, to say that it could have done better.

Towards the end, the characters break down. Yuri especially : she turns from this badass, militant-kind leader of a girl into this tsundere-like character who strangely reminds me of Haruhi, only nuttier – which is incredibly unrealistic. Not to mention that moment where she goes batshit insane and screams about becoming God or something.

Another reason I didn’t cry was that I laughed too much at this scene – in fact, I think I cried at this scene. That set the wrong mood to watch the rest of the episode. I just felt like laughing at everything they did. I was planning on skipping this scene and rewatching it, but it’s stuck in my head. Although I admit, I liked this part, it ruined the whole setting for the tear-jerker ending.

Has anyone ever wondered: why the show is called ‘Angel Beats!’? Brings to mind music of the heavens, but no.

…but seriously, this was a horrible ending. I was already sad when Otonashi announces his plans and confesses his love, but this revelation just brought my mood back from omg-i’m-gonna-cry-if-they-keep-doing-this to what-the-hell.

So she got a crucial heart transplant -and died- before Otonashi – who donated his heart to her – arrived in this world? Woah, that’s kinda trippy.  Oh right- that NPC in episode 12 said it was possible. Right. Of course, multiple dimensions and whatnot. 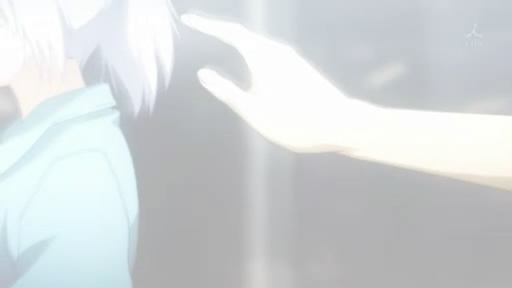 So we end with those cliff-hanger endings, where they all get reincarnated and then Otonashi seems to recognise Kanade (the shadowing of their faces didn’t help in hiding this much.). The end.

Why? Well, this was quite generous for a 13-episode series, to have sufficient plot to have kept me interested in watching every episode on a weekly basis. In fact, I think it’s the only series I have managed to keep up consistently with. But the story concept was original , it was nice to watch. I liked the idea of Purgatory, where troubled souls come to find peace, like Buddhism. I liked the concept. I liked the fact they had no idea where they were ; that they had to fight to survive and that they had to ‘rebel against god’.

Although I admit : the pacing screwed it up. Points gone there. If it had been 24-episodes, it would have made me bawl my eyes out at the end. If only…..

I would have gave it 9001/10 simply because of Kanade but I’m not that superficial.

You know,I was this close to becoming one of those maniacal otaku freaks, like those obsessed with K-On, over Kanade. I’d imagine buying lots of stuff with her face on it, just because it’s an obsession. Every time I turn on my phone I see her. I swear, if Angel Beats was more mainstream, I’d build a mini-shrine to it. But I didn’t, because there was something I didn’t like.

What I did not like, however, was due to the pacing.

Pacing left out proper stories for most of the characters, especially Kanade and Yuri. Nothing much is revealed. We’re still scratching our heads after each episode. What’s up with that last moment? Who were the people in Guild who clearly don’t look like youth? WHO THE FUCK IS TK?

This was in fact, a weak point which the production crew quickly fixed. Up till episode 3, the art was crud : quality was everywhere. But after episode 3, the art quality improved drastically. It’s like the whole crew took drugs or something.

Clearly, something which produces better music than that Music Anime this season deserves some praise.

A great story, a wonderful cast, lots of potential  – but ruined by its short episode run and its pacing. The ending made me sad ; although more closure would have been nice.

So I admit it : Angel Beats is a hit-or-miss anime. Either you hate it, or you love it. Personally I liked it -although I admit, it isn’t the best out there, but I liked it through and through. Hoping for an OVA now, something that sums up the series, or something that brings more closure.

I won't change my religion that quickly ; I'm keeping you on this site

I blog things.
View all posts by Valence →
This entry was posted in Reviews and tagged Anime, Anime, Everything is Neon Genesis Evangelion, Fucking pacing how does it work, GET CHANCE AND LUCK, Rants, Rants, Review, Reviews, Screenshot, This character is one of my gods. Bookmark the permalink.

19 Responses to Angel Beats! – REVIEW – The title is one gigantic spoiler after all. Angel Beats.