I just finished this:

Shawn recommended the first season to me, which I felt was nice, sans the random references to Shana and other Anime under Geneon’s wing. So when I read the information for the 2nd season, I sincerely hoped for less references and a better storyline.

Stroy : Haruka Nogizaka’s Secret: ‘ecchi Purity ‘ indeed. The entire of season 2 seems to have been made up to be like this:

Yes. It’s nothing but a thinly veiled excuse to give us 12 episodes of ecchi plotless nonsense to keep us stuck to our television (or computer) screens.

That’s not the worst thing.

The two things which made me like Season 1 was how Yuuto and Haruka handle their relationship and hide her ‘secret’. It made me laugh, feel and think about the Anime – which was really fun and charming.

Unfortunately, Purezza is different- completely. After the first 1 or 2 episodes, the whole overarching aspect of “hiding her secret” disappears. When that happened, I was hoping deep down : Please, please focus on the relationship.

Then Yuuto becomes a girl magnet through the most unlikely situations, and only till the 2nd last episode did the plot veer back onto Haruka. By then I was already raging (nerdrage, yes.) It lacks focus. Imagine a blind man driving a faulty car missing one tyre with its windows and windshield painted black- and the blind man’s wearing a blindfold inside a cardboard box.  That is an apt description for the plot of Purezza. 3/10.

Yuuto  and Haruka – possibly the most oblivious couple ever. This was played out in Purezza- which frankly stops the plot (if there ever was one) from advancing even a step further. Thanks to this barrier set up between them – which completely ignores everything in Season 1 – the plot veers onto other girls who seem to have been thrown into the script at the last minute. Perhaps they ran out of Anime references. You poor, poor things. 5/10

Music : Light and poppy, it cheers me up for the disappointment down the hill. 8/10

Art:  Well,well, well. Art really reflects how much work is placed into the anime, because it is indeed, one part of  the overall quality check.

Many, many instances of pure QUALITY in Purezza. I’ll only talk about some though: The change in this one is subtle. When the characters re-line themselves up, their height ratio changes. Perhaps it is because some of them were facing downwards in the first shot, but there is a change nevertheless.

Within a timespan of around 4 minutes, Haruka's height in comparison to Yuuto's changes. The first shot is her walking while the other 3 involve her standing next to Yuuto. In the first shot,her head's on the same level as Yuuto's fringe, and it starts shrinking, to his eyebrows in the 2nd shot, his nose in the third shot ( a zoom in of the couple , no less) and to his cheek in the last shot (they are now standing right next to each other as opposed to someone being in front.) 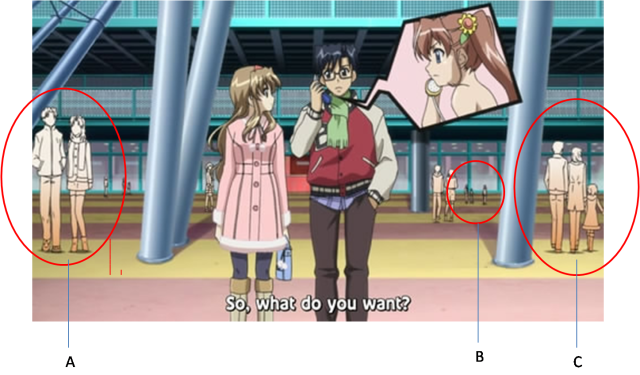 Oh dear, oh dear, the perspective's kind of off for this shot. I did a rough estimation of the features in the screenshot , the old fashioned way- pencil,paper and ruler. Each of the rows( on the floor) is around 1.92 m, if you take the average shoe size of an adult to be around 24 -26cm. Therefore, the two couples A and C are only around 10 cm different in their distances from Yuuto , however the ratio of the height and size of C to A is 12 to 17. Yuuto 's ratio to A, B and C is 60: 34 : 5 : 24, which, according to my limited perspective drawing skills, is impossible, since the distance between Yuuto and A roughly means that the end of the perspective would lie in the fourth row,with the others unnoticeable. Either way, the proportion of A to B and C is messed up. Just saying, is all. 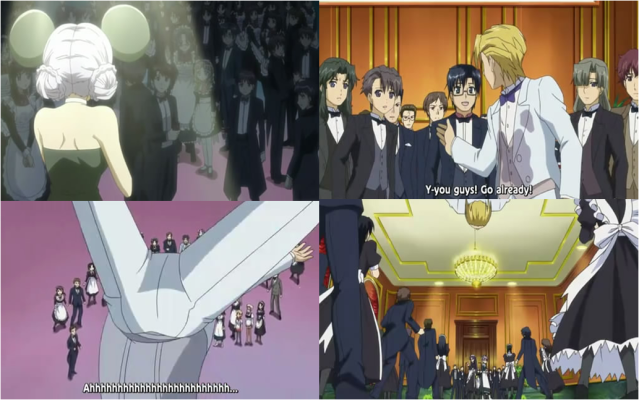 Looks like they've got themselves a morphing room! The first two images indicate a large amount of butlers and maids in the rooms, so much that they are practically next to the walls, while the third image shows a giant empty space where, oh ,I don't know, 50% of the crowd was. And then the crowd spreads out when he lands. Interesting. Sakuya must have attended the maid party.

Oh my, it seems that they have come up with a new futuristic solution to the global food crisis- self-regenerating and fusing Christmas turkey. Or chicken. When Yuuto eats the drumstick, it magically reattaches itself back onto the chicken, which fuses both of its drumsticks together to form this mega drumstick - which, I assume, will be part of two drumsticks from another chicken, which will magically appear on the plate. It would be an infinite process! Wow! We're all saved! Lashings of ginger ale for everybody!

And worse of all: 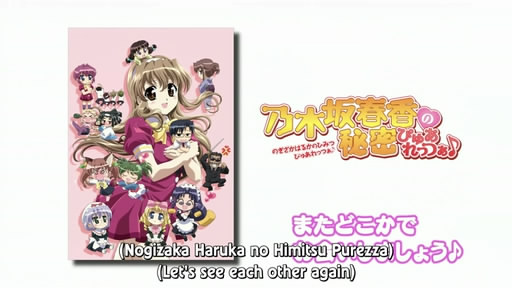 You've got to be kidding me.

It seems extremely likely that there will be a sequel. Hopefully, it will clean up the train-wreck that was Nogizaka Haruka no Himitsu: Purezza – and bring back what we loved from Season 1…

I blog things.
View all posts by Valence →
This entry was posted in Reviews and tagged Anime, Anime, Comparison, Rants, Rants, Review, Reviews. Bookmark the permalink.